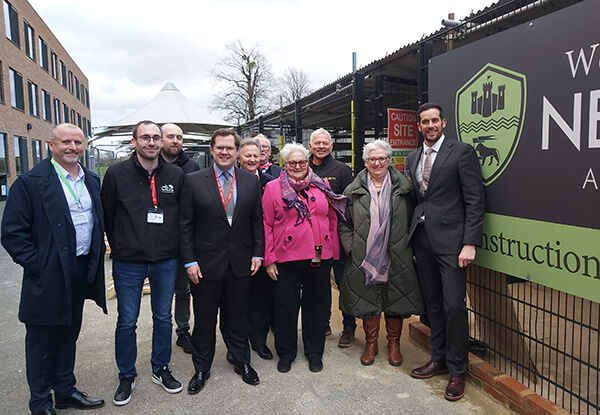 NEWARK ACADEMY held an open day event on Friday 13th January showcasing its construction workshop which introduces pupils to career opportunities in roofing and other trades.

The school workshop offers children from Year 9 onwards the chance to study for a GCSE Eduqas Level 1 and 2 award in Constructing the Built Environment.

Taught by Tony Wagstaff, the young people learn skills in brickwork, joinery and roofing. In roofing, they progress from skills development to constructing a full roofing rig in Year 11 to present towards their exam.

Headteacher, Chris Fisher is quick to explain that the construction option offered at Newark Academy is seen as opening up the whole range of construction career routes for school and university leavers – very much opposing the ‘non-academic route’ it’s so often mistakenly associated with.

Chris said, “The workshop offers a combination of theoretical and practical education which can lead to career opportunities from apprenticeships to university options.

“It’s a brilliant route through to some amazing employment and training places for those children who are motivated. Some routes are academic, where they will progress to construction T’ Levels and undergraduate courses, some offer further training as apprentices, where with hard work they can achieve excellent careers.”

Josh Blant with Alfie Rice (pictured below), both aged 14 years, are enthusiastic about the opportunities Newark Academy’s Construction Department offers.

Josh said, “Not many schools offer construction. This is hands on and helps us get the skills which will make us effective as apprentices or students.”

“It gives us options and helps us decide which career to aim for,” Alfie added.

Set up with the support of Jason Wright, director of Wrights Roofing in Bulwell, Nottingham, the workshop in Newark reproduces the successful program Jason had previously instigated with the Bulwell Academy.

Over the past 15 years, Jason has successfully employed 74 apprentices through the links he has forged with local schools, achieving a 94% retention rate. Out of the total, 17 roofing apprentices have also gone on and started their own roofing businesses in the area, some of whom are now employing apprentices of their own, recruited through the same local school route.

Jason still employs many of the apprentices recruited in this way, some in senior of roles such as Wrights Roofing’s Contracts Manager and Jason points to the 75% retention rate he has after 5 years employment.

Wanting to address the skills gap in both his own business and that of the local community, Jason Wright first became a school governor at Bulwell Academy. In 2008, he developed the workshop model with Chris and Tony who were both teaching at Bulwell at that time.

In the two years the construction workshop at Newark has been operational, Jason has also helped the school establish links with two major construction employers in the area: Derry Building Services and Gusto Homes.

“This introduction to construction means Newark Academy school leavers are apprenticeship ready,” said Jason. “They have chosen construction as an option at GCSE because they see the rewarding career opportunities it offers, and they have a 90%+ chance of finishing their apprenticeship. It’s not unusual to be earning around £30,000 a year at 22 years old, and a roofing career is very flexible and portable – all facts which motivate them,” he said.

“This initiative at Newark Academy needs to be rolled out nationwide so that local employers can recruit apprentices locally. The school leavers coming out of the Construction Department are motivated and articulate,” Jason adds.

Headteacher Chris Fisher added that he would be more than happy to share how they started the Construction Department at Newark Academy with any interested parties thinking about setting up a similar initiative.

>> Read more about roofing career opportunities in the news