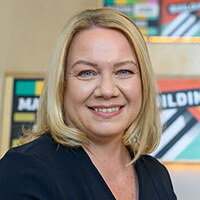 LEEDS COLLEGE OF BUILDING (LCB) has appointed Chris Tunningley as its new Assistant Principal for Adult Learning and Higher Education.

Speaking of his appointment, Chris said, “I am thrilled to start in this post at Leeds College of Building. I’m passionate about how education can raise prospects and know that gaining a sought-after trade or profession while attaining maths, English, and digital skills can be life changing.

“Studying part-time or following a vocational higher-education pathway like a degree apprenticeship is a hands-on and economical route that ultimately leads to the same successful career destination as traditional academic routes.”

In his new role, Chris will oversee adult learning and funding to combat regional skills shortages, plan for future skills needs (such as sustainable construction), and widening participation in education. Chris will also lead on higher education strategy, which incorporates the new Leeds College of Building University Centre, and work closely with employer partners and other professional bodies.

Following this, Chris was appointed Curriculum Manager for Building Services & Civil Engineering and then Assistant Faculty Director for HE, Construction Design & Management at the College.

Leeds College of Building Principal & CEO, Nikki Davis, said, “Huge congratulations to Chris after a competitive selection process against a high calibre of candidate. Chris succeeds outgoing Assistant Principal Brian Duffy, who worked at the College for many years before retiring in December. Brian was critical in the growth of our higher education provision, and I know that Chris will be instrumental in building on this success. May I join others in wishing Chris well as he moves into this role.”

>> Read more about LCB in the news