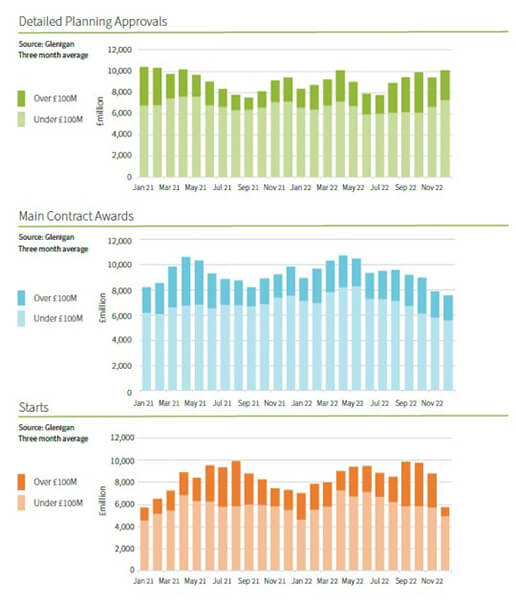 CONSTRUCTION PROJECT starts continued to decline during Q4 2022 by 48% compared to the previous quarter, to stand at levels last seen at the peak of the first pandemic lockdown, according to Glenigan’s January 2023 Construction Review.

Glenigan says the figure is likely to be the result of a set of socioeconomic circumstances hampering the sector over the last 12 months. They range from supply chain pressures caused by international conflict to risky economic decisions made by government.

The fall of project starts by almost half highlights the immense pressure currently on UK construction, further underlined by the figures which are a fifth lower than the same period in 2021.

This overall drop in activity was also reflected in main contract awards, which fell 18% against the previous quarter, and 23% against 2021 levels.

However, a modest increase in detailed planning approvals saw a rise of 2% against the preceding 3 months, to finish 5% higher than the same time last year. It indicates that, whilst the industry is set to experience a leaner six months in Q1 and Q2, it will be potentially followed by a gradual recovery in the second half of 2023.

Back to the Future

Activity plummeting to peak pandemic levels will set alarm bells ringing across the industry, Glenigan expects, speculating that it will prompt a period of caution as contractors and developers delay putting shovels in the ground until they have greater economic certainty.

Major project starts, which have previously accounted for an uptick in sector activity, fell dramatically, dropping 80% on the previous quarter and 55% compared to 2021. Underlying starts had a less pronounced decline, dipping 6% during Q4 and only 7% on the previous year.

Digging deeper, underlying contract awards experienced a significant slump, standing 26% lower than the previous quarter and year, respectively. This was echoed, to a lesser extent, in major contract awards, which also declined 19% in Q4 and 14% compared to 2021 levels.

Planning approvals provided a rare bright spot in the prevailing gloom. Whilst major planning approvals fell 13% against the preceding quarter, the value increased by almost a third (+32%) on last year. Despite this uptick, the slight increase was tempered by underlying performance, with planning approvals dipping 30% during Q4, finishing 4% lower than the same period in 2021.

Glenigan’s Economic Director, Allan Wilen, said: “Similar to the previous iterations of the Review, the sector is still getting to grips with a very hostile economic climate. Prices continue to rise and access to skilled labour is falling, combine this with dented consumer and investor confidence and you have an unpleasant cocktail of challenging circumstances. It’s set to be a tough six months, requiring contractors and developers to be particularly agile and flexible to capture share in distinctly bearish markets.”

“We must also not underestimate the impact of tightening regulation on activity. With Fire Safety Regulations coming into effect yesterday, and the ongoing introduction of the Future Homes Standard, many will be pausing activity whilst they work out a way to balance margin and compliance.”

The sector-specific and regional index, which measures underlying project performance, saw starts softening across the board. However, some verticals, particularly in the commercial realm, picked up, complemented by some positive activity increases in a handful of UK regions.

Social housing was, once again, the major contributor to residential-starts decline, falling 15% against the preceding quarter and 28% on the previous year.

Non-residential performance was mixed during Q4 2022. Offices were the stand-out vertical with starts rising 17% against the previous quarter to stand a third higher than a year ago.

Retail also experienced growth on the preceding quarter (+5%) and year (+4%). Hotel and leisure and healthcare were also up in Q4, 2% and 13% respectively, but were down on 2021 levels.

In contrast, industrial projects suffered, falling 35% against the previous three months to finish the year 22% down on 2021 figures. Community and amenity fared even worse with starts falling 40% during Q4 and 41% against last year’s results. Education remained largely unchanged, only dipping 1% against 2021 and down 2% on the preceding three months.

Growth was inconsistent regionally. The North East was the strongest performing part of the UK, with project-starts increasing 29% during Q4, rising almost three quarters (+72%) on a year ago.

The South East also had a good fourth quarter, with starts rising 29%, representing a 20% increase on 2021. Whilst starts in London (+4%) and the South West (+13%) also advanced on the preceding quarter, remained 19% and 5% lower than last year.

Some regions performed particularly poorly, including Scotland, where the value of project starts fell 43% against the preceding quarter to stand 39% down on 2021 figures.

The East Midlands, West Midlands, and the North West also suffered heavy falls in project starts against the previous quarter and year.

>> Read more on construction project starts in the news