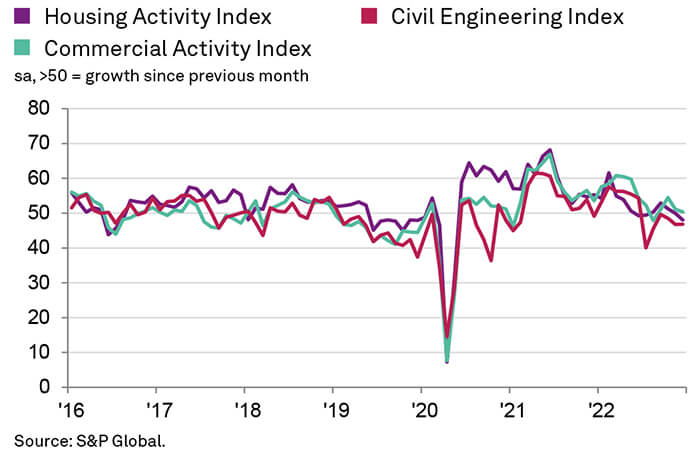 THE UK’s construction sector recorded a fall in business activity during December, ending a three-month sequence of growth, with the rate of decline the fastest since May 2020.

A similar trend was observed for new orders, which saw a renewed fall that was the strongest for over two-and-a-half years.

Concurrently, sentiment amongst firms towards the year ahead outlook for activity dipped into negative territory for only the sixth time on record, reflecting fears around the near-term economic outlook.

Pessimistic expectations were reflected in the first round of job shedding in the construction sector since January 2021.

At 48.8 in December, down from 50.4 in November, the headline seasonally adjusted S&P Global / CIPS UK Construction Purchasing Managers’ Index (PMI) – which measures month-on-month changes in total industry activity – registered below the 50.0 mark to signal the first contraction in construction sector output since last August.

Although commercial construction activity continued to rise in the final month of the year, the rate of contraction eased to the slowest in the current four-month sequence and was only fractional overall (index at 50.3).

As such, the uplift in the commercial sector was outweighed by contractions across the residential and civil engineering sectors in December. Housing activity declined for the first time since last July and only marginally (48.0), while civil engineering recorded a sixth consecutive monthly contraction in output (46.8) and the rate of decline remained sharp overall.

December data also highlighted a reduction in new orders placed with UK constructors, following a modest uplift in November. According to survey respondents, the fall was driven by weak client demand, linked in turn to higher prices charged. Moreover, the rate of contraction was the fastest since May 2020.

Challenging business conditions were reflected in confidence amongst constructors towards the year-ahead outlook for activity, which dropped into negative territory for the first time since the initial COVID-19 wave and for only the sixth time on record. Downbeat sentiment was attributed to expectations of a recession and poor demand conditions, as well as inflationary pressures. That said, the degree of pessimism was marginal.

December data pointed to the first fall in employment since January 2021. Weak sales meant vacancies were often not being filled, according to panellists.

Elsewhere, firms pared back on their purchasing for first time in three months in December, reportedly due to lower workloads. Notably, the rate of reduction was the steepest for over two-and-a-half years.

Average lead times for inputs lengthened to a greater degree nonetheless, with delays the most severe since last June. Shortages and shipping issues were cited as the cause.

Turning to prices, costs faced by construction companies continued to increase during the final month of the year, linked by panellists to energy, material, fuel and import costs.

Although still marked, the rate of inflation was the weakest for two years. Rates charged by subcontractors also rose in December, but at a slightly reduced pace.

“The challenging environment in December was subsequently reflected in pessimism amongst firms towards activity levels over the coming year, with business confidence downbeat for only the sixth time since the survey began in April 1997.

“With the outlook turning negative, staffing levels declined for the first time since the start of 2021 in December. Though panellists primarily attributed the fall to the non-replacement of leavers, the data show that companies are preparing to face significant challenges in the months ahead.”

Dr John Glen, Chief Economist at the Chartered Institute of Procurement & Supply, said: “The construction sector was stuck in the mud in December with the steepest fall in activity since the beginning of the pandemic in May 2020 and a similarly fast drop in pipelines of new work.

“House building saw a notable change of direction, with a mix of higher inflation for raw materials and transportation and the squeeze on affordability rates for mortgages resulting in fewer house sales. The sector subsequently fell back into contraction for the first time since July.

“Civil engineering, responsible for larger projects, continued to be the weakest performer again, with a sixth month in the doldrums as uncertainty about the UK economy reared its ugly head again and customers hesitated. Supply chain managers reined back spending on materials with the sharpest fall in buying activity for over two-and-a-half years as a result of this poor demand.

“Optimism remained very flat and at one of the starkest rates in the survey’s history. Builders were reining back on recruitment unconvinced there will be enough growth in the UK economy in 2023 to justify additional expenditure when margins remained so squeezed.

“Builders are fast running out of the resilient spirit maintained over the last couple of years as the blocks to success piled up and the winter of discontent with high inflation, strikes and shortages continues.”

Brendan Sharkey, Head of Construction and Real Estate at MHA, said: “Despite the decline in December, at the moment the construction sector is coping well overall as prices of materials and supply chain issues continue to stabilise. As many projects were pushed back last year, the beginning of 2023 will be marked by a steady pipeline of work. However, this optimism will be short-lived. Recessionary forces will strike and work is expected to tail off at the back end of 2023. No one feels confident. It is a nervous period to operate as a business, and the sector must stay alert.

“Ultimately while the best-run construction companies will survive, partly due to their inherent financial strength, others, including good contractors who may be dependent on third parties, will unfortunately fail. The recession and cost of the living crisis will continue to bite hard. The sector must brace itself for a challenging and uncertain 2023.”

CEO of Alliance Fund, Iain Crawford, said: “Although the construction sector has continued to produce a fairly robust level of activity in recent months, the economic complications that we faced for much of 2022 have finally taken their toll with a notable reduction in output recorded in December.

Of course, it’s important to note that there is almost certainly a seasonal influence at play here too and with many having already implemented contingency plans in anticipation, we should see a more stable outlook emerge in the coming months.”